On a Given Sunday

Nothing extraordinary or epic happens on Sunday afternoons. A small group of students meets in a campus apartment with blue mismatched furniture. We sip hot tea—steeped extra strong—and eat the benefits of my domestic skills. This week a tray of Scottish shortbread serves as our centerpiece on the coffee table with a bowl of almonds. Beside the table sits a stack of poetry, including an anthology titled Very Bad Poetry. We have no philosophical revelations. We pass around the volumes of verse. Pour the tea, stir in sugar and milk. And in that space we meet each other through metaphor and stanza.

Julia snatches up the Very Bad Poetry, and reads an ode to cheese, the elegy of a little blond girl who dies after eating her beefsteak supper, and the utter tragedy of a flopping dead man, who, upon his death, gives a resounding “Plop!”

“Kohleun, read ‘The Shirt’ in a ‘sexy’ voice,” Amberle says as I flip through Jane Kenyon’s collection, Otherwise.

“Just do it,” Arianne demands with her legs flung over the arm of a once-puffy chair that could easily fit two average-sized adults in its embrace. Four other voices echo Arianne’s sentiments, and I begin to read (and laugh). As I deepen my voice, we retrace the path of “the shirt” as it caresses a man’s neck and “slides down his side.” Karith and Alicia begin to laugh uncontrollably—one croaks and the other squeaks—both sound like they are hyperventilating as they try to hide flaming faces in each other’s sweatshirts, failing miserably. Meanwhile, Heidi is laughing at Karith, and Julia is straining to maintain a ‘serious’ demeanor, holding a smile down with her hands; but at the closing line, “Lucky shirt,” everyone rocks back in her seat and cheers.

“This is definitely going on Facebook,” Amberle says, turning off her digital camera, which has video capabilities, apparently.

Julia continues to thumb through Very Bad Poetry. “’Only One Eye’ by Lillian Curtis,” she reads then clears her throat, “I love the gentle girl, But oh! I heaved a sigh, When first she told me she could see Out of only one eye.” Groans and various other ‘verbal responses’ escape our lips.

“The appropriate title, “Arianne asserts, “should be ‘The Two-eyed Idiot.’”

Amberle looks to Arianne and says, “I’ve found the poem of your life!” and hands her Mary Karr’s Sinners Welcome, opened to page thirty-two.

We learn things about Arianne we had never imagined.

I am on my third cup of tea. Julia runs into the kitchen to put another kettle of water on the hob to boil, and rushes back to recline on the large pillow beside me. While cold rain hits the roof and windows, inside, the heater creates a hum of its own as it floods warmth into the room.

From her corner on the couch, Karith moves her body forward, as if immerging from a secret cavern. She has been cradling Naomi Shihab Nye’s You & Yours for the past fifteen minutes. “I want to read a serious poem. It’s one of my favorites, but first, are there any staunch Bush supporters?”

If there are, no one admits it.

We chuckle a bit when Karith reads from “He Said EYE-RACK”: “On St. Patrick’s Day 2003, President Bush wore a blue tie” But we go silent when she reads:
. . . He said, “We are
against the lawless men who
rule your country, not you.” Tell that
to the mother, the sister, the bride. . .
the librarian careful with her shelves.

“Hmm,” we buzz in our throats, surrounded with books of our own. I straighten a dog-eared corner; Karith closes the book and smoothes its golden cover with her fingers. Alicia twists her wedding ring around its freckled finger. We are all sisters. Some of us are married. We have witnessed our own personal ruinations, though missiles have not exploded our markets and neighborhoods. Heidi, who recently lived in Cairo, leans closer to Karith. Amberle collapses her chin into her hands. And I remember the Palestinian mothers I met in Bethlehem. We chew our almonds quietly.

In this quiet moment, I turn to Ted Kooser and “The Jar of Buttons.” The poem begins like an epic tale on the high sea: “This is a core sample from the floor of the Sea of Mending,” a circle of women that spans generations. I look around the room at friends—some of whom have never met each other before this Sunday—this gathering around tea and shortbread, and I continue reading:
generations of women set forth,
under the sails of gingham curtains,
and, seated side by side
on decks sometimes salted by tears,
made small but important repairs.

After a few more rounds of tea, and we are all more than sufficiently caffeinated and smell of butter and nuttiness, each woman rises to leave. We say our good-byes for the day, maybe even the week, and embrace or kiss air by the cheek.

I stand at the door as rain continues to pour over the eaves, watching my friends walk away, and I squeeze Karith’s shoulder. The almond bowl is almost empty, and the striped fabric napkin, which played the role of tablecloth, is covered in crumbs. I know we have done nothing grand here, nor have we mended shirts or curtains, but we swabbed the decks of other generations with our tea, and rinsed them in the splash of our laughter.
Posted by Kohleun Seo at 4:30 PM 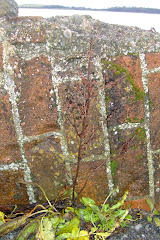 Kohleun Seo
I am a human being studying Philosophy and Women's Studies at university. I dream of someday traveling to the UK to study in postgraduate school. And, when I'm old, I want wrinkles around my mouth. Tea and coffee are (very) close friends of mine, and I'm addicted to library and database searches.